skip to main | skip to sidebar

The year is 1989 and the world was a much different place than today.  Your writer of this blog was in a serious relationship that many thought and hoped would lead to marriage, kids, suburbia you know the drill and who knows it may have.  At that time, 2 work buddies and myself were thinking about a trip to Europe for 3 weeks.

The deal was each of us would select a place to go and we were going for Oktoberfest so Munich could not be on thew list.  I selected Salzburg Austria, one work cohort selected Amsterdam and the third selected Berlin.  Now I will admit I was not crazy about going to Berlin at that time, as Berlin lied in the heart of East Germany and having a Canadian passport that listed I was born in West Germany, did not know what kinds of concerns this would raise.  I was game to go though so plans were made.

I am not going to go into details of the trip, just the circumstances that lead to this photo.  We boarded a train in Amsterdam bound for Berlin, a night train so we could sleep on the train and save money on a hostel room.  Our first indication that going to Berlin was going to be a bit different than most countries we had visited was when the train stopped entering East Germany and instead of a conductor asking to see our tickets, we were greeted with 3 I am guessing were police officers or soldiers, as two of them had very scary looking machine gun type weapons.

Now imagine this, 3 Canadian guys, mostly drunk, passed out, and in some foreign language we hear some asking for something, we think they are asking for our tickets, so we are showing them our tickets half asleep, hoping to pass out again, then being prodded with the barrel of a gun.  Let me tell you that wakes you up in a hurry and leaves a memory for life.  Staring into the barrel of an automatic weapon, has the amazing ability to sober one up in a hurry.  They wanted to see our passports, not our tickets and after examining for what seemed forever the train moved on.

Now Berlin, was an amazing place at that time as this was the beginning of the fall of communism in Eastern Europe.  German people were getting out through Czechoslovakia and Hungary as they were easing restrictions on traveling to the west.  Unlike other European countries at that time, no signs were in English, the four languages most signs were in, German, Russian, and not sure of the other 2, maybe Polish.

A couple of things we found out after being in Berlin for a couple of days and partying with the locals, one they felt if there was a war, they would be the first place invaded so party like there may not be a tomorrow, second thing was there were still people trying and dying getting from East Berlin to West Berlin.  We were there in early October 1989 and someone had died in September of 1989 trying to get their freedom, shocked me as I had heard nothing on any news outlet back in Canada.

We went to the museum at Checkpoint Charlie, that was a combination museum/art gallery was an amazing place.  It detailed the many ways people had gotten from East Berlin to West Berlin and let me tell you was a testament to mans desire for freedom.  The art was very powerful and made one think.  I often wonder what became of this museum/art gallery after The Wall fell.

Now we found out from the locals was you could not get near the Berlin Wall anymore, there were barricades and such and armed police officers stationed there.  The reason being there had been quite a bit of vandalism and destruction of The Wall.  On the East Berlin side you could not get anywhere near The Wall or they would shoot you.

We quizzed the locals extensively about security, and consequences if you were caught trying to get near the wall.  After many beers, some of them told us kind of a way to do, that was less risky.

Now the picture attached to this blog, you will see I am standing right by the wall so how did I pull this off, well an interesting story and shows how crazy, stupid Canadians can be.  Well relatively simple really.

We found the place where the locals had said the security was the least amount and only some minor metal security fences.  So while two of us casually walked along the barricade the “designated photo op” person wandered in a different area and at a time of his choosing he hoped the barricade ran for The Wall, stopped for a brief time until security started approaching and then ran for safety of streets far away.

Now while he stood at The Wall the other two of us took as many pictures as we could till our buddy started running.

Yes, we spent 3 separate days going to The Wall to get a picture of each of as at The Wall.  Now imagine standing at The Wall trying to remain calm, while watching security people, and guessing when the right time was to start running.

To this day I am not sure how serious they were about chasing us, and what would have happened if we had been caught.  By the way, when I mean security people, basically soldiers, they were in full camouflage outfits with military style weapons.

It was worth it for this picture, which was taken by a good friend, who then blew it up to a large photo and framed it and gave it to my parents for Christmas 1989.

I still remember coming back from a work shift in Fort McMurray in November, little over a month after getting home and turning the TV on.  What did I see people standing on The Wall with sledgehammers smashing The Wall, people dancing on The Wall.  I remember standing there for like 30 minutes not moving, not believing what I was seeing.

I am so glad I was able to see The Berlin Wall before it came down.

Also am glad I was able to spend a day in communist East Berlin, which was an experience to say the least, another blog entry some day. 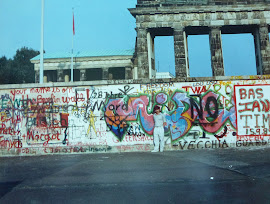 spidey_zombie
I enjoy movies obviously, but also enjoy football, traveling(been to 4 out of the 7 continents)